Nature's diversity and richness is palpably experienced in this exotic tropical island paradise in Western Philippines. 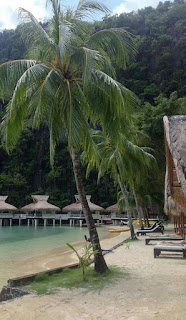 El Nido is a must-visit for all travelers. And it's not just because it has remained unspoiled, but also for offering unique opportunities for tourists to see and immerse into nature's diversity and richness first hand. However, El Nido is not only nature's bounty felt up-close. One may even say that it's richness lies unseen for underneath this tropical paradise are some of the biggest wells of natural gas that the Philippines has been blessed with.

Though some environmentalists may have misgivings on the oil and natural gas explorations in El Nido, fruits from the said development projects are already felt and enjoyed. Located just 80 kilometers off northwest Palawan is the imposing platform of the Malampaya Deep Power Project. Completed in mid-March of 2001, it is, without doubt, one of the biggest power projects of the Philippine government.

According to Shell Pilipinas Exploration B.V., the Malampaya project may be considered an inspirational event for all Filipinos. To see such a large and complex engineering feat accomplished in the Philippines is truly awesome.

The Malampaya gas fields has been providing enough energy equivalent to a third (1/3) of Luzon's requirements. The infrastructure design is mind-boggling as it involves laying a 504-kilometer, 24-inch diameter pipeline from northwest Palawan to the Onshore Gas Plant (OGP) in the province of Batangas. From there, the gas from Malampaya is delivered to three combined-cycle power stations that generates a total of 2,700 megawatts.

Northwest Palawan is not all business and gas fields though. Nowhere is this more apparent than in El Nido, that in Spanish means 'nest,' and which refers to the swiftlets' nests harvested by the locals from the cliffs and clefts that characterize this part of Palawan.

El Nido is made up of about 45 islands spread out within the confines of Bacuit Bay. Each island offers visitors a wide range of attractions perfect for scuba diving, rock climbing, spelunking, kayaking, and a lot more. Unlike other islands, however, El Nido's are unique in the sense that they seemingly jut out of the water to almost dizzying heights.

Some of the more memorable of these islands, aside from Miniloc Island, are the Twin Rocks and Helicopter Islands. The former is a pair of almost identical-looking rock formations, while the latter is an island whose outline, from afar, resembles that of a helicopter sans its propellers.

Although El Nido's craggy islands may look barren, nothing could be farther from the truth. Hidden in the cracks of its limestone cliffs, as well as the crevices of its coral reefs, is a surprising number of animal species endemic to the area. There are over a hundred bird species, along with a number of small mammals and reptiles. There are also around 200 kinds of fish and an, as yet, undetermined number of marine invertebrates.

No doubt, El Nido is a God-send to the Philippines. The Malampaya Project, in particular, has been delivering gas since October 2001. Moreover, the rich wildlife and natural scenery of the area have made it a prime destination for both local and foreign tourists. The area has a tremendous potential that is yet to be fully tapped.

Nonetheless, the challenge of maintaining and striking a balance between the forces of progress and nature is something that should always be considered in the continuing development of El Nido. As to what form this balance will assume, in the next years, is yet to be seen though. Hopefully, it would be for the benefit of all.
Labels: bacuit bay destination El Nido exploration malampaya miniloc natural gas palawan shell pilipinas tourism travel west Philippines