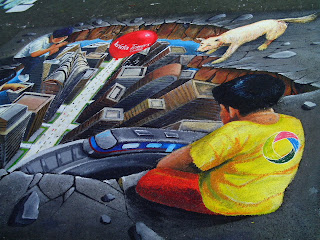 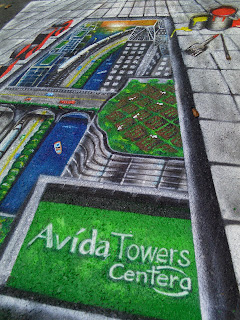 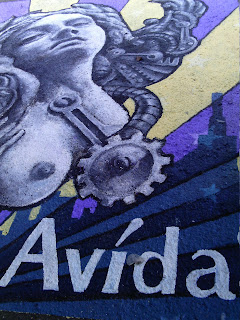 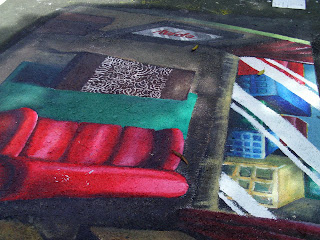 
Three-dimensional artworks dazzled every viewer's imagination at the recently-concluded two-day 3D Street Painting Festival at the Centera Towers grounds along the corner of Edsa and Reliance Street in Mandaluyong City.
The festival was a competition that featured the works of both art students and professional artists as they turned solid concrete into a canvas for their dreamy, surreal and thrilling creations. Visual artists painted works that revolved around the theme “Fast Forward: Life at the Center of the Metropolis.”
3D paintings turned street pavements as channels to another world where fantasy melded with reality. What we usually took for granted - as we simply think of streets as pathways for us to tread upon – turned into lava-filled caverns, cataracts, crevices where giants lurked, and even high-rises populated by super-heroes.
“It's not everyday that we get to see young Pinoy artists gather together and showcase their respective talents unto fabulous artworks. The two-day event was fun as it was educational,” said Avida Land Corp marketing manager Tess Tatco, who was one of the members of the panel of judges.
All the entries were rated according to artistic merit (45 percent), relevance to the theme (35 percent) and over-all impact (20 percent). The champion, Guhit Sudlungan, a group comprised of PUP students, took home a special glass trophy and P75K for their obra “Greater Access to Convergence.” Second placer Stycon Group, a quintet of professional artists also got a trophy and P50K for their work “Converted & Green” while third placer 420, a student group of one guy and three gals from UP Diliman's College of Fine Arts, romped off with a trophy and P30K for their provocative entry “Metropolis Manila.”
The 3D street painting competition, which started at 8 am last Friday 'til 7am the following day, was part of the launch of Centera Towers, the latest high-rise development of Ayala Land Corp. “Centera is our 9th condominium project in eight locations all over the metro. It is our first venture in the Tiger City of Mandaluyong and the first mix-use development wherein lifestyle and retail concepts will be sheltered in a commercial hub to be known as Lifestyles @ Centera. It will also be the first project with floor-to-ceiling windows in all of the twelve 2-bedroom units at the topmost floor,” informed Avida president Leo Montenegro at the close of the awarding ceremonies inside the sprawling Mega-Tent facility in Pasig City.
Art aficionados can still view all the entries of the street painting festival by visiting http://facebook.com/AvidaLandCorp where all the finalists' artworks are posted. The entry who gets the most number of “Like” will be hailed the Facebook Choice and will receive a trophy and P20K.
“Check out the amazing works and experience 3D street painting like never before,” Tess invited. For more details on how to cast your choice, simply call 678-2692.
Labels: art