The word ‘volcano’ would conjure images of an eruption spewing forth lava and ash, or a tranquil and majestic cone-shaped mountain like Mt. Fuji or Mt. Mayon. But in military parlance, the word refers to ‘the regiment’ composed of valorous Filipino men and foreign nationals who fought against the occupying forces during World War II.
And that’s how our national rugby team got its name!
The Philippine National Rugby Union Team, nicknamed the “Volcanoes,” is the country’s official representation to the international rugby union. With countless gold medals to their name, besting prominent countries in international tournaments, the Volcanoes have now become headlines in Philippine sports news.
Today, the Volcanoes are the most successful team in the Asian Five Nations Tournaments, next to Japan. In the past five years, the Herculean squad has lost only one match, losing to South Korea in Division One in 2011. In 2012, the Volcanoes stormed into the Top 5 with an unbeaten run, besting Chinese-Taipei, Singapore, and Sri Lanka in a round-robin series.
“These guys are doing their very best to win the World Cup in Moscow. It’s been a long while since a Filipino national team won in the international arena. The last time was in 1954 when the Philippine basketball team won the bronze. You can’t simply wear the medals too without the finance behind it.
“It’s an extremely physical game but great to watch. Training in this heat is not easy and neither is it easy playing in extreme wet and cold conditions,” apprized William Bailey, emissary from the British Chamber of Commerce Philippines.
This year marks a new era for the Philippine Volcanoes as they bring the Philippine flag to the 2013 Rugby World Cup Sevens in Russia this coming June. This athletic feat is a big first for the country and even deeper for Fila Philippines, who will accompany the Volcanoes to the prestigious competition as their official sponsor.
One of the largest sportswear manufacturing companies worldwide, Fila’s proud and long-standing history dates back to 1911, when the Fila brothers opened a clothing business in Biella, Piedmont, Italy. Fila became popular in the world of sports, particularly lawn tennis, through the endorsement of legends Bjorn Borg and Boris Becker. Today, Fila is a global mega-brand for sportswear, with specialized lines for running, basketball, racquet sports and golf.
In the Philippines, Fila opened in 1983, launching with an apparel line and later specializing in footwear under the company name Fila Philippines. Since then, it has become one of the country’s premier footwear brands, under the leadership of visionary couple Butch & Christine Albert.
“As a nation ready to rise, our battle cry is ‘Fila-Pinas.’ Like the Volcanoes, we are ready to erupt into the international scene. I believe in what the team is doing, just as our 17-year-old son is very much into it.
“To date, Fila Philippines has 350 stores nationwide carrying our five lifestyle brands – Everest, TIVA, Outdoors, Freestyle, and Fila. We are the market frontrunner in basketball, badminton, cross-training, running and sports casual. The company is poised to dominate, especially with our exciting new innovations,” declared Fila Phils. CEO Christine Albert.
Energized with originality, boldness, color and design, and guided by a rich and storied history, Fila Philippines is charging head-on towards the future, and unto a new era of sports. Let the cheer thunder on and grow even more as the Philippine Volcanoes heave on to the showground of the champions. Finally in league with the big boys, the country’s own are pumped more than ever. And with Fila standing behind it in full support, there will be no backing down.
Pinoy pride truly burns deep. Stand strong and proud behind our Philippine Volcanoes jocks as they charge for victory in the 2013 Rugby World Cup Sevens in Moscow. With team captain Michael Letts, the nine other team members – Alex Aronson, Justine Coveney, Ben Saunders, Harry Morris, Matt Saunders, Patrice Olivier, Gareth Holgate, Jake Letts, and Andrew Wolff – will compete against arch-nemesis South Korea this coming Saturday, May 11th, as part of the World Cup qualifying rounds.
When not competing, the Volcanoes train continually; and even invite aficionados to try-outs every Mondays and Wednesdays through their Rugby 101 sessions at the ULTRA Stadium in Pasig City. 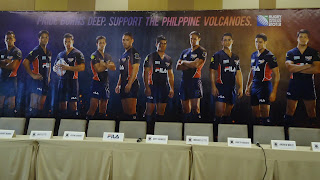 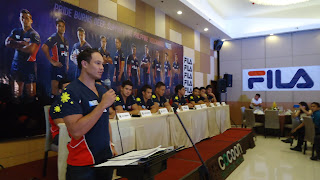 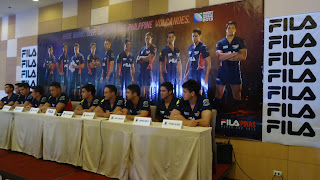 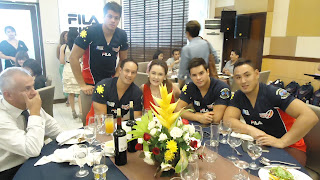