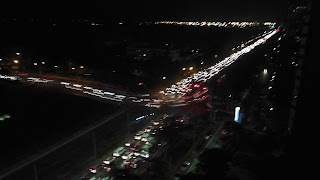 Aside from Good Friday, when was the last time you traveled without a traffic congestion, especially on rush hours?
In a recent car company event, one of the sales persons, who drove us on a road test, affirmed that half of Metro Manila's 90-million residents own four-wheeled vehicles. Traffic congestion, therefore, is a direct result of consumerism.
Day in and day out, young minds are bombarded with messages and images on attaining goals to reach the heights of success; which included owning a vehicle of their choice. The functionality of owning motorized carriers is, at times, drowned by personal wants and/or aspirations.
Yet, for people who come from areas with no traffic congestion to speak of, the jam could be a novelty. And for writers like me, especially playwrights and novelists, these moments could be rife with stories and verbal exchanges among passengers; giving wordsmiths a steady stream of vignettes that chronicle mundane metropolitan life. All at once, we become privy to the travails that beset beleaguered men and women, and how these concerns ring true to races across the globe: low pay, unpaid wages, amortizations, utility bills, tuition fees, domestic squabble, marital infidelity, lover's quarrels, and a host of unimaginable conspiracy theories.
To a profiler, the riding public could very well be a microcosm of the entire workforce and the manpower that serve them in return: from the executives in their tastefully coordinated corporate ensemble to the lowly laborer in his tattered workclothes, and everyone else in between.
Driving your own vehicle is not bad per se, as it brings convenience of travel to and from work. It takes people to other places. And some models become useful during weddings as bridal cars. The problem lies in the abuse, such as driving without procuring the license the right way. And when more people get theirs the wrong way, mishaps are bound to happen and road courtesy would be non-existent. How can we expect someone who didn't learn reading road signs and light signals to understand them? There's also the issue of reckless driving as well as old vehicles plying the streets and carriers belching smoke into the air; greatly contributing to the dense smog and alarming carbon footprint.
Ironically, the very same persons who complain about traffic jams are the very same ones who aspire to acquire vehicles of their own. The way I see it, commuters and travelers have three options.
They could change their perspective and embrace traffic congestion as a necessary ingredient of daily urban routine. Or, they could fight it until their voices, and of others like them, bring about reforms in our transportation laws, especially in the prescription period when old vehicles have to be discarded are disallowed on major thoroughfares.
Or, if that proves to be a blank wall as well, collect your cool and simply weave your way around any gridlock in any manner you see fit. After all, nothing beats Filipino ingenuity. With that being said, how was the traffic today?
Labels: avenues congestion lto mmda problem roads streets thoroughfares tmo traffic vehicles