Of fiery passions and burning desires
By Earl D.C. Bracamonte

If you were a young woman in the early 1940s who got raped – and impregnated - by a Japanese soldier, would you let your child live? This is the dilemma that confronts the pivotal character Chayong in Artist Playground’s adaptation of Dan Hollanda’s war-time drama Lagablab; a play inspired by British writer W. Somerset’s short story The Unconquered. 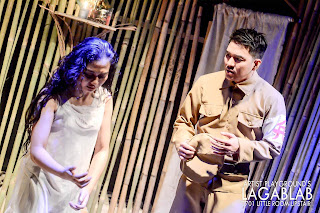 Directed by Paul Jake Paule, the 1-hour, 9-minute play is set in Bulacan during the Japanese occupation. The story revolves around the desolation of a Filipino family who was forced by the cruel realities of war in making difficult choices of either painfully giving up their dignity in exchange for security or bravely fighting for their name and reputation to a bitter end.

“Lagablab is the second show in our 2nd season. Artist Playground is an arts company that would soon have a visual section and film department. The historical perspective was taken into account in the portrayal of the characters.  It has the same plot as that of the short story with minimal revisions.

“The production design details help in the mood of the scenes. The actors themselves prefer the intimate setting as they feel the ‘breathe’ of the audience and get aware of their ‘mistakes’ instantaneously.  Bigger stage spaces need bigger actions as against small ones but both need perspective. Because of the length of our production play dates, we do multi-casting to fill in schedules as actors also have varying work skeds,” shared Paule.

The setting is so intimate that when a character lights one of the oil lamps, you can smell the lingering odor of a burning matchstick.

“Dan Hollanda’s material came from a similar story that he co-wrote with two other playwrights. We went for his version because it was tightly written.  The play’s time frame was confined to nine months in the three-year Japanese rule. We used the original material but added some scenes to differentiate the mood in every scene. I usually don’t follow chronology in presenting a story. This is an exception,” added Paule.

The heroine of the production is the strong-willed Chayong (Jhaeka Madronio), who is betrothed to the guerilla Unyo. On the night of the latter’s departure to join the fight against the Japanese, Chayong was raped by Hirohito (Manu San Pedro), a Japanese officer. Her brother Carding was emasculated from defending her. The unspeakable act bore Chayong a child. Upon learning of her predicament, Hirohito was filled with remorse and tried to rectify his transgression by providing for Chayong’s family and offering his hand in marriage.

However, the news of Unyo and his brother Carding's death at the hands of the Japanese invaders ignited a great fire in Chayong’s heart, a fire that blazes for vengeance; a fire that burned through her soul to commit an unspeakable act at the very end.

“In this time and age, the battle is no longer between us and an invader, but the battle is between our selves. We have become a paradox: we are the oppressor and at the same time the oppressed. The horrors of WW II clouded our definition of ‘self.’ We see ourselves as a sole entity, an entity in a constant fight for survival. We tell ourselves that only the fittest survives.

“Unity is what defines a family, a society, and a country. As individuals, our identity and dignity can only be defined in references to our community. The battle now, is not a fight that calls for raising arms but it is a challenge beseeching every individual to spread true kindness and real compassion.  It calls on everyone to rise above our differences and be courageous in honoring and supporting one another’s vulnerabilities. Harmony is the only path towards regaining dignity and rediscovering our national identity,” expounded artistic director Roeder Camanag, on the production’s rationale.

Despite an alternate ending for Catholic school viewers, Lagablab is an unflinching commentary on the interplay of mores and morality in a time of war.

“Lagablab was a recital piece from last season. I saw it was good material so we made it a part of the 2nd season.  The Japanese experience created a scar in the Pinoy psyche. Oppression was prevalent despite a short regime. Those who were made ‘comfort women’ had to contend with the prevailing morality of the milieu as stigma was attached to being such.  The morality of the play depends on the material.

“Actors also do production work aside from being part of the show. The entire floor space is 67 sq. meters. The basis for our season programming is the running time of a material. It should not be longer than an hour.  This play is the longest by far.

“We have an ‘open door policy’ wherein classes are offered for people who are interested to be part of Artist Playground. This type of theater is akin to many underground theater systems in Japan.  Our theater season runs for six to seven months and the rest of the year is for our classes.

“An actor’s energy mechanics is what he uses in platforms like these. In my research, and after being immersed in several acting styles, I realized everything is connected to one’s breath.  It is our bridge to the subconscious and to the every stimulus, as well as the outside world. Actors need to understand their respective instruments. Otherwise, some things simply get lost in translation.

“We have three plays per season plus some pocket performances and our recitals. The production materials we choose are those that have value and social relevance. And always, we go for diversity. That’s why it’s a playground!” intoned Camanag at the end of our colloquy.