“This is for my country, the Filipino people; for our struggles and the struggle of humanity,” said Diaz in his acceptance speech. 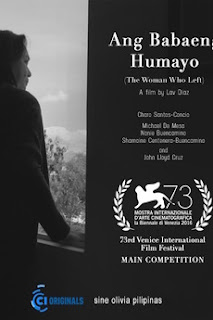 Ang Babaeng Humayo is about a woman (Charo Santos-Concio) released from prison 30 years after being framed and wrongfully convicted and who plans to take revenge on her former lover. Like Hele sa Hiwagang Hapis, the movie is also shot in black-and-white. The four-hour-film marks Santos-Concio’s return to the big screen after a 20-year hiatus.

“I’m so proud,” Santos-Concio told ABS-CBN News. I’m very happy for Lav Diaz – he really deserves this. When we were planning the film back in March, we told each other we were just going to have fun. This really is a most unforgettable moment. In 1976, Charo won as Asia’s Best Actress for her role in Mike de Leon’s film Itim (The Rites of May).

The screenplay for The Woman Who Left was also penned by Lav Diaz as an adaptation to Leo Tolstoy’s short story God Sees the Truth, But Waits.

A spokesperson for Philippine President Rodrigo Duterte said in a statement: "This triumph of Lav Diaz is the latest addition to the Philippines’ biggest ever haul of awards in this year’s A-list film festivals - Berlinale, Cannes, and now Venice. The luster of the world-class Filipino talent has continuously shone.” 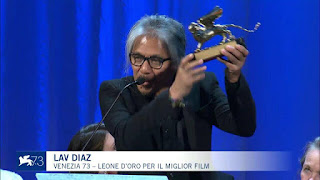 The festival jury was led by British filmmaker Sam Mendes, who chose the winner from 20 film entrants competing at the 73rd edition of the annual festival.

Lav’s triumph in the international film circuit began in 2014 when he won the Pardo d;Oro (Golden Leopard) at the 67th Festival Internationale del Film di Locarno  with his entry Mula Sa Kung Ano ang Noon (From What is Before).