Casting couch and other fleshly tales
By Earl D.C. Bracamonte 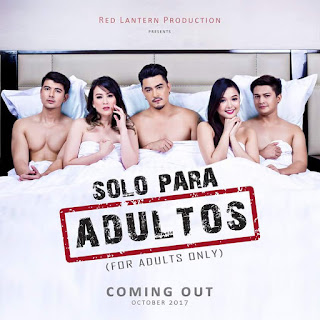 Solo Para Adultos (SPA) is an original Filipino three-act sex-comedy that oozes with love and passion as it evokes, on stage, our wildest fantasies. The play centers on the interrelated lives of its characters as they search for love, fame, and the meaning of life.

"SPA is inspired from the works of Academy Award-winning Spanish director and screenwriter Pedro Almodovar who is known for films with high-strung women on the edge - All About My Mother, Women on the Edge of a Nervous Breakdown, Talk to Her, Bad Education, Volver, and I'm So Excited, to name a few - but the concept of which is entirely different as it is a social commentary about what's happening in the Philippine entertainment industry of late," shared show writer and director Bong Ramos, during an intimate media luncheon at the Via Mare in Quezon City.

After years of separation, both Veronica and the man she once loved and left behind, Alfred (Starstruck alumnus Vivo Ouano), who is now a massuer, get intimate with each other again.

Meanwhile, JV (reigning Mr. Gay World John Raspado), the closeted matinee idol, has been having trysts with his masseur Alfred, who is always prodded by her mother to become a movie star. Their clandestine rendezvous was life-changing for both of them. So JV faces his demons and gives love a new lease, while Alfred, on the other hand, decides to pursue his dreams to become a movie star; as a fulfillment of his mother's dreams.

The three characters will also have to pit talents with two equally gorgeous and daring personalities - sex scandal veteran Georgina (Japanese-Filipino singer-actress Tori Garcia) who is out to dislodge Veronica, and stripper Nicolas (film-TV-theater actor Andres Vasquez) who is all-willing to make a name for himself in the murky and crazy world of showbusiness.

How far will the characters go to achieve what they long for in life? Will they be consumed by their passions? Or will their vulnerabilities be exposed?
One of the reasons that make this production a thrill to watch is the neophyte talents debuting on stage. Except for Vasquez, Gustilo, Ouano, Garcia, and Raspado are all first-timers as far as theater work is concerned.

"Casting went through auditions. As a way of researching for their respective roles, I required the actors to watch some films. For Andres who's playing the role of a stripper, I suggested that he observes how macho dancers behave on stage, as well as their dance routines, as an immersion for himself, in preparation for his stage performance.

"SPA is a black comedy that delves on sexuality and gender with a more personal attack. It is a story on people who keep on dreaming and hoping despite their many struggles. This initial presentation is a one-night-only engagement for us to test the waters for this type of show; though thespians and audiences are ready with adult themes. We plan to have more play dates for SPA come February 2018, not just in Metro Manila but in other cities around the country," intoned Ramos, at the close of our colloquy.

Red Lantern Productions aims to mount all-original Filipino shows - straight plays, musicals, or even related meaningful events - that cater to the discriminating tastes and sensibilities of the Filipino audience.