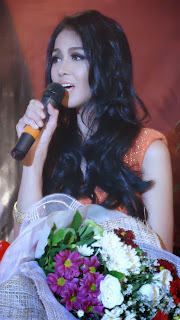 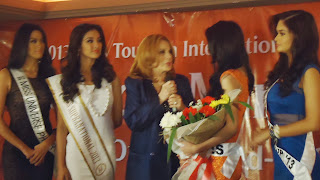 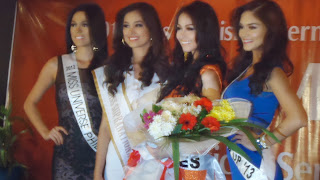 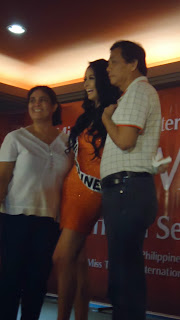 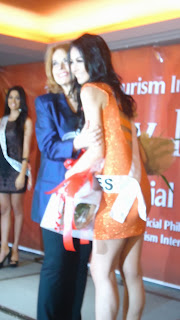 Reigning Bb. Pilipinas Tourism Cindy Miranda left for the city of Xianning in mainland China to conquer the 2013 Miss Tourism Queen International (MTQI) crown; a title won by Filipina model Justine Gabionza in 2006.
Fueled by the support of her family, friends, fans and the Binibining Pilipinas Charities Inc. organizers, Joana Cindy Miranda expressed her confidence in representing the country and winning the crown on Thurs, October 3rd.
“I have prepared for this my whole life, and I have been praying to win. I am blessed with tremendous support from my family, friends and the Binibining Pilipinas Charities Inc. organizers and this prepares me for the competition ahead. I’m not just gunning for the crown. I want to bring home the title to give pride to the country, especially with all the calamities and problems the country is facing now,” said the 21 year old stunner from Nueva Ecija.
Like fellow Bb. titlist Mutya Johanna Datul, who won the Supranational title in Belarus recently, Miranda also shares she is very well trained by the Binibining Pilipinas Charities Inc. organizers. She has been getting pointers and tips from no other than Miss Universe 2010 4th Runner-up Venus Raj. She has also been working with Dale Carnegie for personality development and has trained with the country’s top speech experts for the Q&As. Cindy has also doubled efforts in toning her physique by working out at Gold’s Gym while undergoing a protein-based diet.
“I love reading inspirational books. These give me new ideas and inspiration that I can use during the competition. I go to church even late at night to pray because you’re never sure of the outcome in the finals. I want to attract positive vibes and show that I deserve the title. My charm would be a rosary that I got from Manaoag together with a new one that was given to me,” she added.
Asked if Mutya Johanna Datul’s recent victory in Minsk added pressure for her to win the MTQI 2013 crown, Cindy shared she admitted to initially feeling pressured, but is now more motivated to win. “Mutya’s recent win is both pressure and an inspiration. Kung kaya niya, kaya ko rin! I envision myself, like Mutya Johanna, coming back to the Philippines with a crown and making Filipinos proud with my victory. The golden batch of Binibining Pilipinas is really gearing for a grand slam this year, and we are all really working hard to bring home the honors,” continued Cindy.
“Stay confident, that’s needed for winning. You can surprise them with that alone. You have the support of the Filipino people and we’ll root for you as well. At this point in time, we seem to be getting used to getting winners every year. A word of caution though – no politics! Those issues are for heads of state,” declared BPCI chairperson Stella Marquez de Araneta.
Miranda shares she is working with Datul and has received tips for the MTQI pageant. “Mutya Johanna’s advice for me was to be myself, just be confident and to always smile.” Cindy also says she counts on her natural beauty as her edge against her other competitors.
“Pray and follow the same advices you gave me when I left for Belarus. You need not overthink. Everything has to flow. If I made it, then you’ll surely do as well; much more than me,” encouraged the newly-crowned Supranational queen.
“We’re here to extend our support to our daughter. Whatever the results may be, we’ll accept it. We love you so much, good luck anak,” intimated Antonio Miranda, Cindy’s father, during the send-off rites at the Gloria Maris Banquet Hall in Araneta Center.
“You know how much we love you. We’ll always be here to support you and pray that all your dreams come true,” well-wished Cindy’s mother, Annaliza Viron.
Cindy shares she is working extra hard for the competition and is dedicating her quest for the crown to her father who is currently experiencing complications from diabetes. Miranda shares, “I am a daddy’s girl. He has been supportive of me all the way and has been cheering me throughout the Binibini competition, so I hope to win the crown and make my father proud, especially with his condition now.
”I also want my fellow Pinoys to be happy with good news from afar despite the bad things happening around us. Moreover, I want to experience whatever Mutya had achieved on the global stage.
”The Philippines is known for beautiful places like Boracay, which is a global tourist destination. A lot of other equally scenic vistas have to be seen and I want to promote all of these locales. I’ll show the world that Filipinos are not merely OFWs but a people who pursue other career options too.
“This pageant is not the be-all and end-all as I’ll still be a better Cindy Miranda after all these. I’m far from what I was but still not what I want to be. There’s nothing to be ashamed of about the Philippines and in being a Filipina. I’m proud to be one!” intoned Cindy.
For more news on the other Binibining Pilipinas 2013 winners and their upcoming international pageants, simply visit www.bbpilipinas.com and/or the Binibining Pilipinas official Facebook page, www.facebook.com/realbbpilipinas.