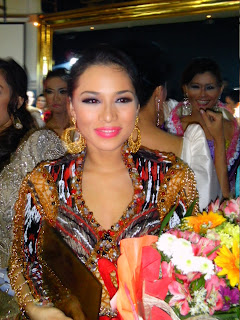 Showcasing the beauty from within
Text & photos by Earl D.C. Bracamonte

The countdown to the crown draws to a close as Bb. Pilipinas 2011 aspirants sashayed before mall-goers in their carnival-inspired costumes at the tail-end of the Parade of Beauties around Araneta Center, a week before coronation night.
A few days earlier, the pre-pageant party dubbed “The Road to the Crown,” was held at the posh Republiq bar inside the spacious Resorts World complex. The highlight of the event, hosted by cousins Borgy and TJ Manotoc along with Ms. Universe-Philippines Venus Raj, was the parade of this year's forty official candidates donning their stylized Filipiniana costumes as designed by different leading couturiers of the country. Contestant #2, Elizabeth Clenci, who wore a tribal-inspired outfit from the South, was named the evening's Best in National Costume.
Apart from the bustle of fittings, pasarela and technical rehearsals, the forty official candidates are blazing the metro with their activities, guesting and charity visits. Last month, the girls held, hugged and huddled with the abandoned infants, toddlers and crawlers of the CRIBS Foundation.
The said entity's volunteer & resource program supervisor Liway Flores was visibly touched by the presence of the ladies and the generous in-kind donations of the Bb. Pilipinas charities Inc. (BPCI). “It was an awe-inspiring experience to be visited by women who showed that they are beautiful inside and out! This is the first time that we've been visited by an 'all-beautiful' group. The kids had a wonderful time,” she gushed.
Ms. Universe-Philippines Ma. Venus Ra and reigning Bb. Pilipinas-World Czarina Gatbonton joined the candidates as they shared fun and wonderful moments with the children.
Thereafter, the girls, together with the production team of broadcaster Korina Sanchez, visited elementary students at Culiat and Old Balara in Quezon City to distribute slippers. It was a humbling experience for the ladies, who are used to wearing signature stilletos, and be confronted with the realization of how an ordinary pair of tsinelas could mean that much to a child's life.
The Bb. Pilipinas beauty pageant has certainly come a long way since its first staging at the historic Araneta Coliseum in 1964. The pageant is an annual project of BPCI, a non-stock, non-profit organization founded by its chair Stella Marquez de Araneta. The beauty search is BPCI's primary instrument in pursuing its mission of spreading peace and love across the nation.
The Binibining Pilipinas annual pageant was envisioned as a prestigious fund-raising activity for projects that would benefit orphans, indigent families and other less fortunate members of Philippine society. Apart from producing the country's best beauties as representatives in various international competitions, it has been a key partner in nation-building for over four decades; providing skills training, educational workshops, mission work, and other relevant services for the marginalized sectors of the community.
With the exception of Gemma Cruz who won the Miss International crown in 1965, a year after Stella Marquez (de Araneta) of Colombia won the very first crown, the Bb. Pilipinas beauty pageant has produced five Filipina titlists over the years: Miss Universe winners Gloria Aspillera Diaz (1969) and Margie Moran (1973) as well as Miss International titlists Aurora Pijuan (1970), Mimelanie Marquez (1979) and Precious Lara Quigaman (2005). Last year, Ma. Venus Raj won 4th Runner-up in the Miss Universe 2010 tilt.
Now on its 47th year, the Bb. Pilipinas search is experiencing a renaissance of sorts, becoming even more exciting with the positive changes it is undertaking. For starters, it will hand out only two (of its usual three) titles – Bb. Pilipinas-Universe and Bb. Pilipinas-International. The Miss World local franchises now owned by the Cory Quirino Global Quest and will conduct its very own pageant in July.
The Grand Coronation Night will be held at the Big Dome on April 10, 8pm and will be aired live to a nationwide audience via the ABS-CBN network.
Labels: pageants