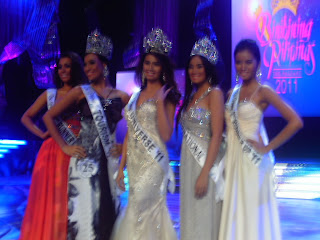 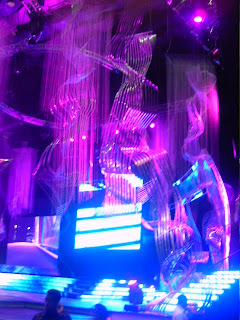 An architect is pageant's major winner
By Earl D.C. Bracamonte


24-year-old licensed architect Shamcey Supsup was crowned Binibining Pilipinas-Universe 2011 at the close of the pageant's glitzy rites at the Big Dome. Tipping the scales at 105 pounds and measuring a whistle-bait 32.5-23.5-33.5 figure, the 5'7 1/4” looker from General Santos City bested 39 other hopefuls vying for the coveted title. An early favorite, Shamcey also won as Ms. Creamsilk, Miss PAL and Best in Talent. Last year's 1st runner-up Diane Necio was proclaimed Bb. Pilipinas-International while Isabela Manjon was declared Bb. Pilipinas-Tourism. Janine Togonon and Mary Jane Lastimosa were proclaimed runners-up in descending order.
Samantha Purvor was everyone's buddy, after the contestants voted among themselves, and won as Miss Friendship. The pollsters voted for Angelia Ong as the People's Choice 'Face of Binibini' recipient. Former basketball rookie Queenierich Rehman won Best in Swimsuit and crowd favorite Luzelle Felipe was proclaimed Best in Long Gown. The latter, an 18-year-old stunner from Hagonoy (Bulacan), also won the Manila Bulletin's Reader's Choice award.
The most touching moment in the pageant was the In Memoriam segment when two former queens were remembered: the very first Bb. Pilipinas in 1964, Myrna Panlilio-Borromeo; and 2009 Bb. Pilipinas-International Melody Gersbach, who fared in a vehicular mishap.
As a project geared towards promoting peace, goodwill, trade and tourism, Binibining Pilipinas Charities Inc. (BPCI) also serves as benefactor to named civic and charitable institutions with this annual pageant. As a non-stock, non-profit organization, BPCI is likewise donor to several other outreach institutions.
“The forty girls will be presented in a way that highlights their beauties and elegance in production numbers that are both classy as they are hip,” enthused BPCI chairman Stella Marquez de Araneta, moments before curtain call.
The Grand Coronation Night was the culmination of almost four months of searching for the most beautiful Filipinas based here and abroad. Last January, droves of girls trooped to the BPCI offices to file their applications. After all the screenings, 108 applicants made it to the semi-final round. The girls then underwent four stringent screening sessions under the scrutinizing eyes of the BPCI Board together with reigning and past Bb. Pilipinas queens that included Ms. Universe-Philippines 2010 Ma. Venus Raj and Miss International 2005 Precious Lara Quigaman. Finally, forty of the loveliest girls emerged as official candidates and were formally presented to the media at the Sofitel Philippine Plaza. The weeks that followed became a flurry of charity visits, talent presentations, photo shoots, sponsors visits, fashion shows, parades, trainings and fittings.
Binibining Pilipinas, the beauty pageant, has also achieved what other local beauty pageants have done by accepting applicants from the regional areas all over the archipelago. The spotlight on aspirants from outside Metro Manila gives provincial lasses an even chance to compete on the national pageant and perhaps, receive an accolade if she emerges victorious at the international search. Now, more than ever, young Filipinas from the different regions across the country, as well as those living in overseas communities, who have nurtured the dream of becoming a title holder are given the rare opportunity to realize their personal aspirations when they compete alongside beauty title entrants from the National Capital Region.
According to outgoing winner Ma. Venus Raj, “The pageant picks the most deserving Filipinas who exude charisma, intelligence, confidence as well as inner and external beauty. The winners get to travel and meet interesting people and go places. Suddenly, doors are opened for winners like me as opportunities abound and offer themselves. We also become positive role models for aspiring girls from all over the country and those living abroad.”
This year, a number of contestants represented the Filipino communities abroad.
Several pre-pageant activities have been culminated weeks prior to the coronation night including the press presentation ceremonies at the poolside of the Sofitel Plaza Hotel. All the girls paraded before press photographers and media attendees in identical bikinis of bright vermilion. Prior to the poolside photo-op, the contestants were presented at the Luzon Ballroom of the hotel in the same two-piece swimwear.
“This is the 47th edition of the pageant with components from Filipino communities overseas. With their ingenuity and charm, our Filipinas from abroad have beautifully showcased Philippine pulchritude not just in Asia but the rest of the world,” added Mrs. Araneta.
With each passing year, the Binibining Pilipinas parade of beauties have become grander and more glamorous. This year's pageant was no exception as it presented highlights equally exciting and titillating in the course of its 47-year history.
The winners will each compete in international beauty pageants that will be held in different continents all over the globe. Sao Paulo, Brazil for the Miss Universe and Tokyo, Japan for the Miss International.
Along with the prestige and thrill of being proclaimed as representatives to international beauty competitions is a grand showcase of prizes that includes a management contract worth P500,000 from BPCI; scholarships from the Berlitz Language Center, Entrepreneur School of Asia, and the Dale Carnegie Training Center; a trip for two to the Ms. Universe/ Ms. Int'l headquarters; personal accident insurance worth P2million from Philippine Charter Insurance Corporation, wardrobe packages worth P500,000 and 18 months free membership from Gold's Gym. The victorious ladies will also enjoy a year's supply of Creamsilk products, the beauty queen's secret to beautiful hair. In sum, each of the winning ladies stands to take home an enviable prize package in cash and kind worth more than P4million!
To date, the Philippines has produced two Binibning Pilipinas-Universe title-holders who have been crowned Miss Universe: Gloria Aspillera Diaz (1969) and Margie Moran (1973) and four Bb. Pilipinas-International who have been crowned as Miss International: Gemma Cruz (1965), Aurora Pijuan (1970) Mimelanie Marquez (1979) and Precious Lara Quigaman (2005).
Binibining Pilipinas winners are chosen based on the following criteria: beauty of face and figure, personality, poise and intelligence. Hosted by Derek Ramsey and KC Concepcion, together with beauty queen anchors Miss Int'l 2005 Precious Lara Quigaman and Miss Universe 1999 1st Runner-up Miriam Quiambao, the coronation night was beamed live to a nationwide audience via ABS-CBN's Kapamilya network.
Labels: architect beauty binibining pilipinas 2011 bpci Filipina pageants shamcey supsup UP alumna