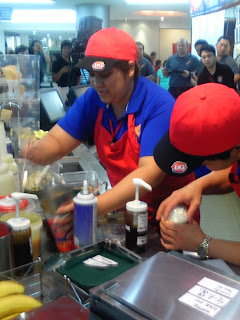 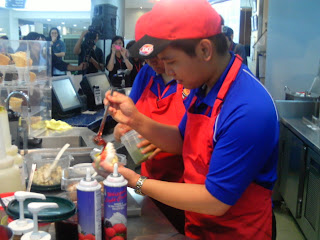 Battle of the ice-cream wizards
By Earl D.C. Bracamonte

Dairy Queen has been the 'comfort zone' for those who love ice cream and other awesome tasting treats like banana split that satiates intense cravings for cold sweets especially in the sweltering heat of summer. The dessert place is home to the Dilly Bar, one of the world's most favorite ready-to-eat frozen delights; as well as the all-time best-selling Blizzard that's served upside down, and their delectable ice cream cakes.
The brand has established its reputation as the best place to satisfy anyone's sweet tooth and yearning for cold treats. DQ endss its first quarter for 2011 with a bang as it concluded the first-ever Dairy Queen Chillympics.
The first of its kind in the country, the competition was a gathering of DQ front-liners from all over the Asian region: mainland China, Thailand, Brunei, Indonesia, Macau and the Philippines. 'Twas an awesome battle on which team's concoctions reigned supreme.
Different treats like Blizzards, moolattes, cones, sundaes, shakes and premium fruit smoothies comprised the categories. To make the contest more exciting, the teams had only 10 minutes to create all of the aforementioned.
The second round of competitions saw the teams being quizzed on DQ product knowledge. Points were given to the first team that provided the correct answer. And to make the contest stiffer, points were deducted for every wrong answer.
Scores from the product making and the the Q and A session were then collated to come up with the champion. The grand prize winning team from Shanghai received US$1000, while the first runner-up duo from Thailand got US$600. The teams from the Philippines and Beijing tied for second runner-up and each received US$400.
Dairy Queen is the worl's No. 1 ice cream chain with over 6,000 stores nationwide. After celebrating 75 years in the business, Dairy Queen has evolved from being a simple ice cream kiosk to becoming a world-class brand serving soft-serve treats that everybody loves.
Labels: banana split chillympics competition dairy queen dessert dilly bar dq events food ice cream soft-serve treats