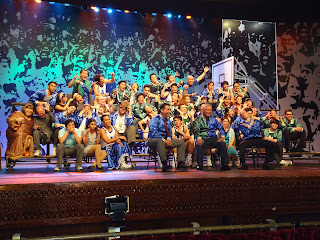 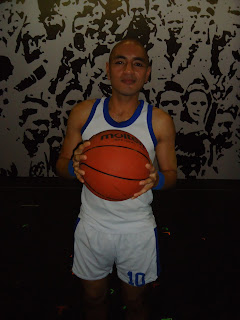 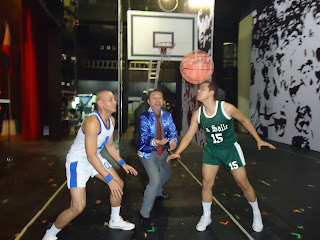 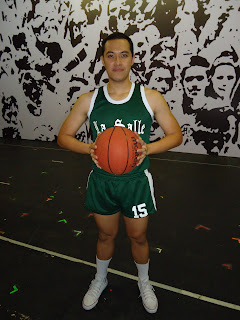 
The rivalry between Ateneo and La Salle, or between DLSU and AdMU, has been going on as far as everyone can remember. How this all began, no one can exactly say. In any field of competition, the electricity of this rivalry sizzles, permeates and explodes. This is most evident in every basketball game between the two schools during the NCAA days and now, in the UAAP tournaments. Thereafter, the rivalry just spread to include every area of competition.
Rivalry: The Musical was written with 1968 as its setting; an appropriate time when AdMU and DLSU were still part of the NCAA together with San Sebastian, Letran, San Beda, Mapua and Jose Rizal competing for the annual coveted title as champions of the varsity league. “Before 1968, Ateneo was an all-boys school. It was only that year when it turned co-ed. Thinking of situations on heartbreak and basketball, I started penning the music on how to best bring out these emotions by using melodic patterns I’ve known; as well as beats and rhythms that would push the story forward,” shared executive producer Ed Gatchalian, who is also the show’s musical director, composer, arranger and orchestrator.
The story revolves around two families: The Basilio family, headed by Green-blooded Demetrio (Raymund Concepcion) and his wife Dolores (Sheila Francisco). They have a son, Tommy (Maco Alonso), who is the star basketball player of the La Salle senior basketball team; the other family is the Valencia family, led by Blue-blooded Papa Anton (Juliene Mendoza) and his wife Andrea (Jennifer Nuyda), Dolores’ sister. There are two children in the Valencia brood – Paco (OJ Mariano), the star player of the Ateneo senior basketball team and Quito, the very passionate and active member of the Social Order Club, consistent honor student and class president.
Despite belonging to opposing teams, Tommy and his cousins, Paco and Quito, are the best of friends. And faced with the possibility of playing against each other for the NCAA basketball championship, Tommy and Paco seem to be unmindful of this complication.
On another issue, Quito has a secret love for a Maryknoller, Reena San Jose (Athena Tibi). This very natural emotion attracts a very complicated love triangle when Maco enters the picture.
The drifting closeness of the cousins is shared by their fathers as well. It seems on the surface that their long-standing personal feud is on account of their respective schools. In the end, the real cause was on account of how they dealt with a serious conflict in their professional careers. Realizing the futility of prolonging the feud, they decide to bury their hatches.
Academics continue to be a rival issue as well. Social concerns also awaken the sensitivities of both schools. In summation, the rivalry is clear: the Atenean and La Sallite have a mutual silent respect for his rival, who he considers worthy enough to be a threat and win the girl he loves, the basketball championship that he hopes to win, and the future job that he will compete to covet.
In effect, the cause of the rivalry resulted in the Atenean and the La Sallite to excel in every field. The neutral group then brings up the question: “If as rivals you pursued excellence and became successful, what more if you were allies?”
This thought intrigued both camps. As they start to move towards each other in an attempt for a hand shake, they quickly stop and say “No, this cannot be. Without rivalry, there can be no Ateneo, no La Salle! The rivalry goes on!”
But what they really meant was that without rivalry, the future Atenean and La Sallite will not be as good, as excellent, as successful.
Executive producer Ed Gatchalian, being a true blue-blooded Atenean from grade school through two years of college, knew what it was like to live the rivalry. But he wanted to be accurate, true and unbiased in his creation. So, he called his friends from the rival school to sit down with him and share what it meant to be a La Sallite. Three of his old La Sallite friends (Juan Miguel Llamas, Tony Cervantes and Jimmy Morelos) provided what Ed needed to progress in his story development which, by the way, took 32 years to see its fruition.
The idea was broached to him, during his Champoy stint as musical director on TV, by his friend and grade school classmate Noel Trinidad, who was toying with the idea of coming up with a musical on the fabled Crispa-Toyota rivalry in the PBA. But due to other priorities that time, the idea remained in hibernation.
In the musical, Noel Trinidad makes a splendid cameo as the patriarch Eliseo Genaro; performing a show-stopping song-and-dance number reminiscent of Gene Kelly in “Singin’ in the Rain.”
Directed by Jaime del Mundo, with lyrics by Joel Trinidad, the show runs from Thursdays through Saturdays at 8 pm, with matinee shows at 3 pm on Saturdays and Sundays, until March 11th at the Meralco Theater. For tickets, simply call Ticketworld at 891-9999. Coeds from DLSU and AdMU, as well as other campuses, can visit the Facebook fan page, Rivalry: Ateneo-La Salle The Musical.
Labels: basketball musical NCAA Pinoy production theater UAAP