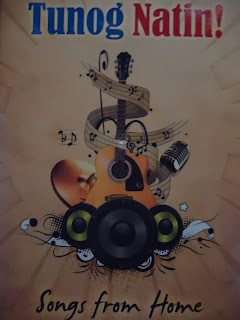 Of home-grown tunes and other classic hits
By Earl D.C. Bracamonte


“Tunog Natin: Songs from Home,” the compilation album, creates a bridge between past and present as it charts the future of Original Pilipino Music (OPM). It is a natural progression from the Tunog Natin series of concerts that has been received enthusiastically by audiences all over the archipelago. “Coming out with a new album is definitely a huge step towards promoting OPM further. The success of the concert series has paved the way to this new venture,” declared marketing head Tess Tatco.
“The enthusiastic response of audiences to the Tunog Natin shows is nothing less than inspiring for us. We’ve always supported efforts to promote Filipino culture and Tunog Natin as both the concert series and the album makes for an advocacy that we are proud to be a huge part of,” she added.
The album blends a harmony of classic OPM songs as well as new musical compositions – literally essaying the songs of our lives: from first love to our first heartbreak; and our coming-of-age that speaks of nostalgia and bitter-sweet memories of friends and family, of heart and home.
Making the compilation album more interesting are collaborations between sixteen artists of different music genres. This gives old OPM hits a unique and fresh sound that young and mature listeners would enjoy alike.
The collaborations give each track an exciting twist. Since the artists all come from different musical persuasions, they create a fresh yet familiar and endearing sound that will renew our love for OPM.
Familiar classics, like The Dawn’s “Salamat,” are given new life and fresh sound by collaborations between established and respected OPM veterans and their successors. In the aforementioned song, up-and-coming rock band Letter Day Story jams with rock legend Pepe Smith to come up with a version that lends a new vibe to the ‘90s staple made famous by vocalist Jet Pangan.
“This project has brave new material aside from the covers for the classics. The album’s rife with renditions of Pinoy music gems. It is released as an indie album to do away with problems in labeling,” intoned True Faith’s lead vocal Medwin Marfil.
Soul singer Arnee Hidalgo joins quirky all-male band Tanya Markova to record the Apo Hiking Society classic “Pumapatak ang Ulan” while rapper Gloc-9 and jazz singer Tricia Garcia does a duet of Rey Valera’s undying ditty “Kahit Maputi na ang Buhok,” popularized by Sharon Cuneta in the ‘80s.
The new compositions, on the other hand, continue the legacy of OPM in building and uniting our nation through music. Pop prince Myrus, who is also Tunog Natin’s project head, recorded Noel Cabangon’s ballad “Kanlungan” with chanteuse Princess Velasco. True Faith’s Medwin Marfil and new act Sheng Belmonte give their own rendition of “Umagang kay Ganda.” Pop’s new music sensation, boy-band 1:43, did a splendid cover of Parokya ni Edgar’s enduring hit “Harana” and Kenyo’s front-man Mcoy Fundales blends vocals with alternative princess Barbie Almalbis for the brand new song “Kay Sarap Mabuhay.” Capping the compilation is the Tunog Natin advocacy song “Heto Ako,” written by critically-acclaimed producer and arranger Jonathan Ong, with all sixteen artists participating in the recording of the anthem.
“Tunog Natin is a great way of showcasing the creativity of Filipinos and preserving OPM for younger generations who have no idea of the vast wealth of Pinoy songs in the archives. We will continue to advocate OPM and other aspects of our heritage,” enthused Tatco.
The concert series and the compilation album are not simply venues that showcase Pinoy sound, for they create a ‘home’ for OPM in our cultural consciousness as well as cultivate and promote our own brand of music. Tunog Natin is one more reason to keep the faith, slowly but surely, that OPM will make its resurgence in the hearts and minds of young Filipinos; who are up to now glued to foreign acts because of constant airplay and music channel hype.
“Radio and television stations must work synergistically with OPM artists. These days they mostly play foreign acts. If that continues, it will slowly blur Pinoy sound into oblivion. It’s a field of dreams, so if you build it, it will flourish. At the end of the day, it has to be one creative vision for the country. If you invest in your own roots, and our culture, you’ll eventually reap the rewards,” lobbied album producer Jonathan Ong.
This is why having Avida Land Corp. as the corporate sponsor from its inception is particularly apt: while the company’s business is building dream homes for Filipinos, it is also doing its part, in cooperation with Filipino artists, the impetus to build a stronger foundation and a refuge for OPM in the hearts and minds of Filipinos.
As Kiss Jane mouths the lyrics to “Beep Beep,” listeners are instantly transported to the cacophony and melee of downtown Quiapo and similar congested thoroughfares of the metro; making daily travel exciting and new with its catchy melody. Audiophiles are urged to join the throng of OPM lovers, through a journey on the wings of song, and rediscover home; as we all sojourn to places where only OPM can take us.
“Let’s all support the new Pinoy songs and enrich the OPM sound by doing so. Let’s increase entries in our OPM library because right now it’s not growing that much,” observed record producer and talent manager Chris Cahilig.
Composed of ten tracks of all-OPM music, featuring seven covers of timeless classics and three original tracks, the album will be exclusively available in Astrovision and Astroplus record stores nationwide as part of its on-going advocacy, with Avida Land Corp., to revive audiences’ appreciation for OPM.
Labels: advocavy events OPM Pinoy sound recording